In my quest to take over the social sphere... OK, expose a few more people to our music, I tried out "Twitter Promote Mode". Instead of making individual ads, it just forwards your first 10 tweets of the day to more people who don't necessarily follow you and costs £79/month (or $99). You choose three of a small list of very generic interest demographics such as "Entertainment", "Travel" etc and off it goes.

Now, they do say it's in "Beta Testing" which means it is not a full-on, battle-tested product yet (although allegedly good enough to charge that much for it...).

"For a low monthly fee, your Tweets and account will automatically be promoted. Reach up to 30,000 additional people and add an average of 30 new followers each month.*

With a caveat at the bottom...

"your performance may vary".

The demo graph they show you is this: 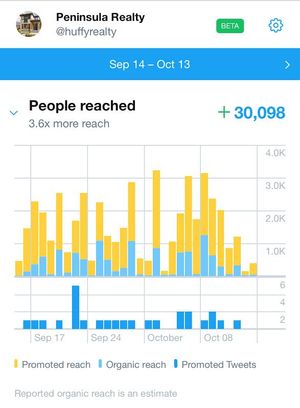 Who knows if this is a real graph or made up for demo purposes but looks pretty good, right? Over 360% more reach than their organic reach to existing followers, whoop! 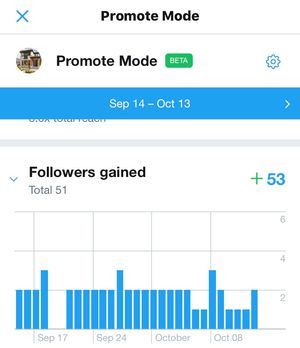 And they have gained 53 new followers too. OK, not so impressive but not bad.

Well, these are our results:

Firstly, to make sure I was getting my money's worth I did way more tweeting than normal. I was averaging just under seven tweets a day. Our usual average is 30 - 100 tops. 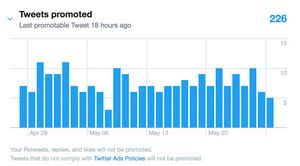 This is how many people we reached: 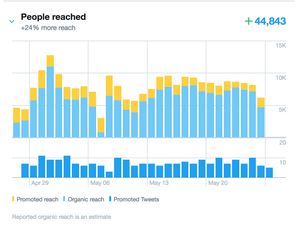 As you can see, our yellow "promoted" reach is a lot less than the example graph. It says we reached an extra 24% over what we would have reached without  Promote Mode. This equates to 10762. Only a third of the "up to 30,000" alleged.

A whopping 14. For the first half of the month, it was averaging about one a day but halfway through it stopped completely. I will add that we gained a total of 39 followers this month, 14 from Promote Mode and 25 organically. This is maybe slightly up on the average but not the most we've ever had in a month, probably due to the effort put in trying to get my money's worth.

So to sum up, is it worth it? I would say no, not for that price. The results were marginally better than the organic reach and growth and I think £79 can be much better and more wisely spent.

Next up; Tweetpi.com. I'll let you know how that goes in a future post!